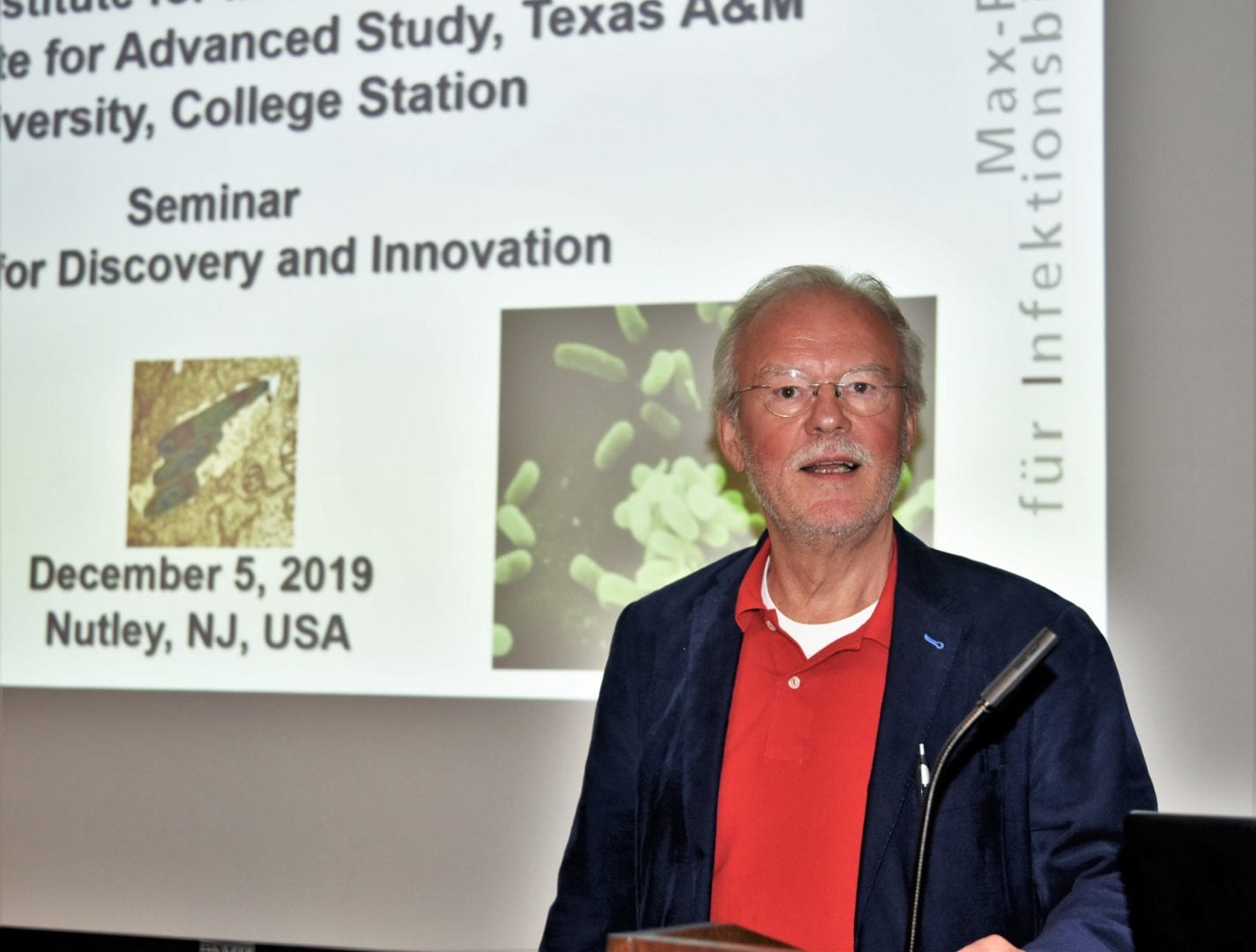 Bacteria which are normally harmless when found in low amounts promptly activate and begin attacking a host once they have achieved sufficient numbers to do damage, according to a new publication in Science.

How the normally-benign germ Pseudomonas aeruginosa marshals its forces to do severe harm to a host was previewed in a recent “Distinguished Scholar Seminar” at the Center for Discovery and Innovation, a member of Hackensack Meridian Health.

The senior author of the paper, Stefan H.E. Kaufmann, Ph.D., of the Max Planck Institute for Infection Biology, previewed the results of the Science paper on Dec. 5 in a talk entitled “The Aryl Hydrocarbon Receptor Senses Bacteria and Drugs: Consequences for Infection Dynamics and Therapy.”

“Quorum sensing molecules” are used by bacteria to detect one another through microscopic communication. This chemical “discussion” thereby establishes their population in an environment, according to the presentation by Dr. Kaufmann, founding director of the Max Planck Institute for Infection Biology in Berlin where he heads the Department of Immunology.

By reaching a certain threshold of density in the given environment, the pseudomonads produce illness-inducing substances and mucous molecules, which defend them against both antibiotics and the body’s immune system, according to the research.

The body’s natural defense: a pathway to “spy” on this bacterial communication. The immune system relies on the help of a mechanism known as the aryl hydrocarbon receptor. This receptor detects the quorum sensing molecules, enabling body cells to detect when the bacteria are preparing for an attack, according to the work. The immune system also has a built-in detection mechanism which, when functioning properly, also prevents premature mobilization of natural defenses, added Dr. Kaufmann.

“This is effective for the host, as it saves energy to leave a small number of bacteria alone, provided they aren’t causing any damage,” said Dr. Kaufmann, in a Max Planck statement. “Only when they’ve reached a critical mass is the energy required for defense mustered. This also helps prevent collateral damage caused by the immune system’s response.”

The results have “implications for drug availability and host-directed therapy,” according to Dr. Kaufmann’s lecture at the CDI.

“This is a really classical way of looking at immunology: you see a molecule, you do something,” said Dr. Kaufmann.

Several dozen listeners in the CDI auditorium followed the methodology of Dr. Kaufmann, a scientist credited with more than 900 publications and who is co-developer of a recombinant vaccine candidate against tuberculosis which is currently in the pipeline.

“He is truly a heavyweight in research,” said Martin Gengenbacher, Ph.D., an assistant CDI member, who acted as emcee for the lecture.

The Science paper was published on Dec. 20.