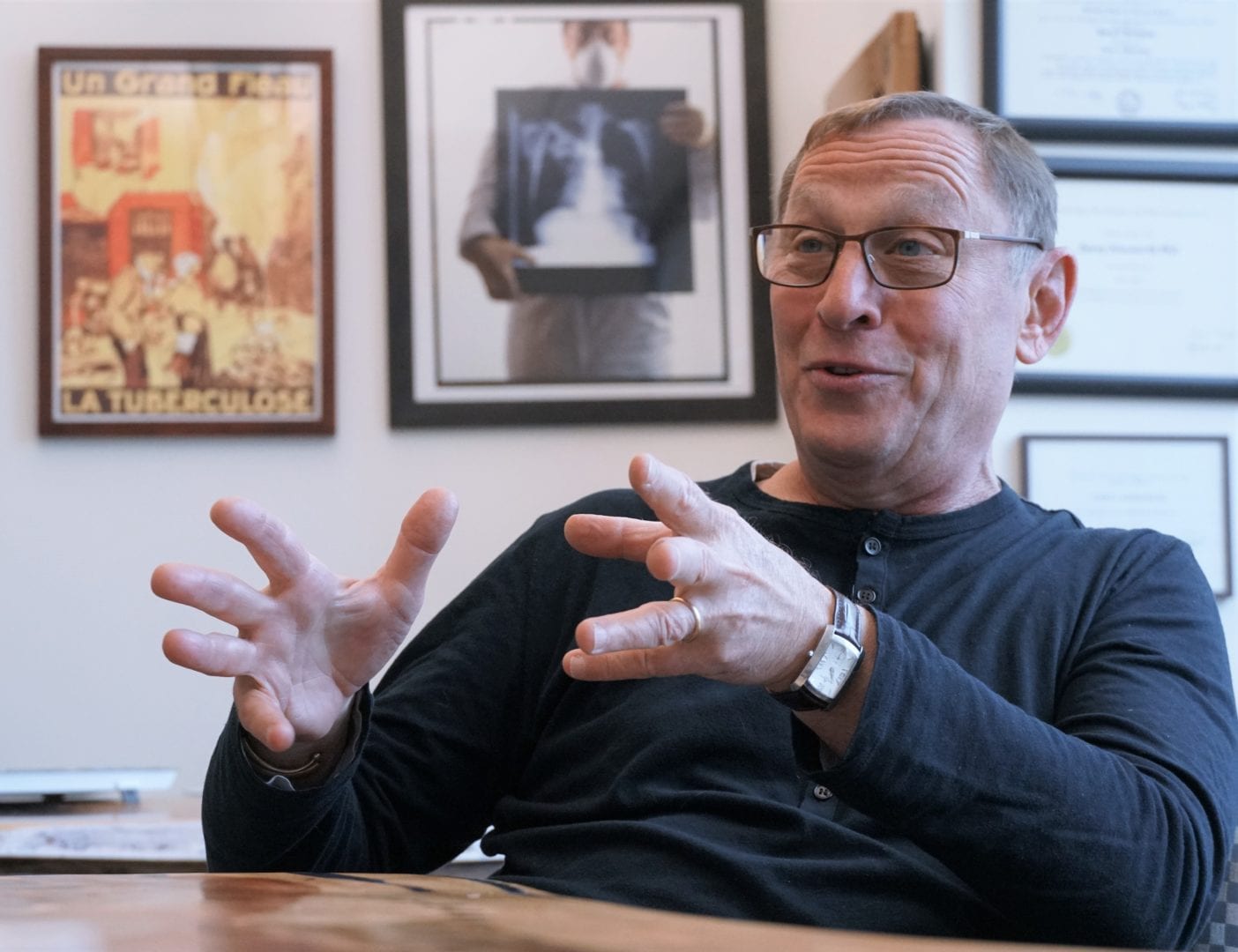 Every decade or so, it seems, Barry Kreiswirth has a new scourge to tackle in his laboratory.

There was the HIV/AIDS crisis and its resulting infections like drug-resistant tuberculosis in the New York region in the 1980s and 1990s. There are also the lesser-known but insidious bugs like Klebsiella pneumoniae, also known as KPC, which have developed resistance to the crucial class of carbapenem antibiotics. And there is the recent rise of a single mcr-1 gene, which has begun to give some “superbugs” across the globe near-total resistance to colistin, a last-resort drug option.

Dr. Kreiswirth has discovered, while hot on the trail of these germs and many others over the last four decades, that one can become all too familiar with certain infections.

“I’m sick of gram-negative bacteria,” he said recently, with a bit of a laugh, in his fifth-floor office at the Center for Discovery and Innovation (CDI), a member of Hackensack Meridian Health.

That’s “sick” in a figurative sense, of course. Barry Kreiswirth, Ph.D., a founding faculty member of the CDI, has never been infected with the dangerous bugs he’s put under the microscope. He’s simply spent enough years with tuberculosis and other “nasty” contagions that professional curiosity has drawn him in other, new directions. Those new directions may just help steer the way hospitals of the 21st century track their “bugs” in the future.

The likes of The New York Times and 60 Minutes have sought Dr. Kreiswirth’s insights on outbreaks over the years – and National Geographic featured his (masked) face, while he held an X-ray of a tuberculosis patient’s lungs, in its glossy pages in 2004. But Dr. Kreiswirth is moving onto other projects at the CDI – which may prove to bring his biggest contributions to public health research yet.

Forensic microbiology has been heavily influenced by the decades of work by Dr. Kreiswirth, said David Perlin, Ph.D., the chief scientific officer and senior vice president of the CDI, and a longtime colleague of Kreiswirth.

“Barry’s one of the pioneers and luminaries of tracking the spread of infectious disease strains,” said Dr. Perlin. “To bring him to the CDI, with his expertise, was such an obvious thing.”

‘FINGERPRINTING’ TB
Dr. Kreiswirth, a molecular epidemiologist whose career spanned about 30+ years at the Public Health Research Institute (PHRI) before his arrival at CDI in 2019, sits at an elaborate table in his office he carved himself (a major hobby for him outside the laboratory). From that table, Dr. Kreiswirth provides plenty of the backstory behind many of the microbiological headlines of the last few decades – as he lived it.

He has not focused solely on gram-negative bugs, of course. From the very first, his doctoral dissertation in microbiology was focused on a gram-positive germ and its lethal effects:  the hunt for the genetic basis of the “toxic shock syndrome” toxin in Staphylococcus aureus.

The methicillin-resistant variety of the staph bacteria, popularly known as MRSA, was another subject that consumed years of Dr. Kreiswirth’s professional life. He and colleagues implemented spa typing to genotype methicillin resistant S. aureus (MRSA) and investigate nosocomial outbreaks; by most accounts their methods have become the gold standard to support hospital infection control efforts.

But it was tuberculosis which vaulted Dr. Kreiswirth to national exposure. Dr. Kreiswirth worked for the PHRI, first as a graduate student and newly-minted faculty scientist in the second half of the 1980s. A short stint as the chief of the New York City Department of Health’s Phage and Typing and Antibiotic Susceptibility Testing Laboratory followed, before Dr. Kreiswirth became head of PHRI’s then-new Tuberculosis Center.

The PHRI TB Center had come to focus on the study of molecular epidemiology of TB – right at the time that the AIDS epidemic had made drug-resistant strains a resurrected health scourge in some underserved areas, like parts of New York City. Dr. Kreiswirth’s lab thus worked closely with the CDC and the Health Departments of NYC and New Jersey to track – and then control – the spread of tuberculosis.

In a breakthrough which was catalogued by the likes of The New York Times, 60 Minutes, and National Geographic, Dr. Kreiswirth and his colleagues managed to track down the spread of single strains of tuberculosis using then-new DNA methods. For instance, in one case, the scientists isolated the spread of a germ lineage down to its beginnings at a men’s shelter in the Upper West Side of Manhattan.

“It was Barry’s molecular fingerprinting that was really critical to track the spread of TB,” said Dr. Perlin.

But there were many other bugs – both gram -negative, and -positive – which teemed under Dr. Kreiswirth’s microscope. In response to the evolving needs swirling in New York City and Newark, his laboratory developed, step-by-step, many of the rapid diagnostic tools and the methodology to track the spread of the new advent of opportunistic infections, like the aforementioned MRSA and K. pneumoniae.

In total, Dr. Kreiswirth has been an author on more than 450 publications – and counting.

A ‘DRIVE TO ZERO’
Dr. Kreiswirth, who grew up in Elizabeth, N.J., is good with blunt assessments, core observations. He will tell you: for many of the current drug-resistant infection problems, there is simply “no easy answer.” Originally, some predictions had placed the eradication of TB to happen in the year 2015. But that date has come and gone, and yet the disease persists, despite efforts.

“We’re training these bugs,” Dr. Kreiswirth told The New York Times in 1996. “We’re making them better at what they do. They’ve been around for three and a half billion years and we thought we were going to win? Who were we kidding?”

But the fight continues, for Dr. Kreiswirth and his colleagues.

As part of the Antibacterial Research Leadership Group Dr. Kreiswirth is a key member of an elite infectious disease collaborative consisting of clinicians and scientists assembled by the National institutes of Health to address emerging drug resistant bacterial threats.

The group published a paper in Clinical Infectious Disease in March 2017 summarizing the ARLG’s novel initiative called MASTERMIND (the acronym for Master Protocol for Evaluating Multiple Infection Diagnostics). Outlined in the paper are interlocking databases: the physical biorepositories like those of Dr. Kreiswirth and colleague Robert Bonomo, of Case Western Reserve University and the Louis Stokes Cleveland Department of Veteran Affairs Medical Center; and a virtual biodepository. By cataloguing and cross-referencing the phenotypes and genotypes of the germs in the clinical setting, in real-time, the goals are to better target the individual infections, while also driving down unnecessary antibiotic usage, according to the paper.

Dr. Kreiswirth sees the new CDI opportunity to bring a similar, but different, kind of tracking to the clinical setting at Hackensack Meridian Health. The hospital network has already started its “Drive to Zero” initiative to come as close as possible to eliminate hospital-acquired infections. Kreiswirth said further steps can bolster that effort and move it far beyond what other hospitals systems are currently doing to battle clinical infections.

One example: for stem cell transplant patients, a quinolone antibiotic is administered to stave off infections as a standard prophylactic before the procedure. But a problem has arisen in that a subset of patients play host to bacteria that have a quinolone resistant gene. A simple perianal swab, with a sequencing profile, can determine who these patients are – and get them the right preventative drug, saving long-term hospital stays, severe illness – and potentially even lives.

But it’s going to take more painstaking work to put the infrastructure in-place to determine these crucial details, he said.

The “Drive to Zero” will alter the status quo: a change in how clinicians investigate medical conditions – and how microbiological culprits might be better thwarted, said Dr. Kreiswirth.

“It’s the idea of integrating translational research into clinical patient care,” he said. “Talking about it and doing it is a little different.

“It’s not just research – it’s a new standard of care,” added Dr. Kreiswirth. “The initial thing is getting the data. It’s not just for a project – it’s to change our mindset about managing infections.”