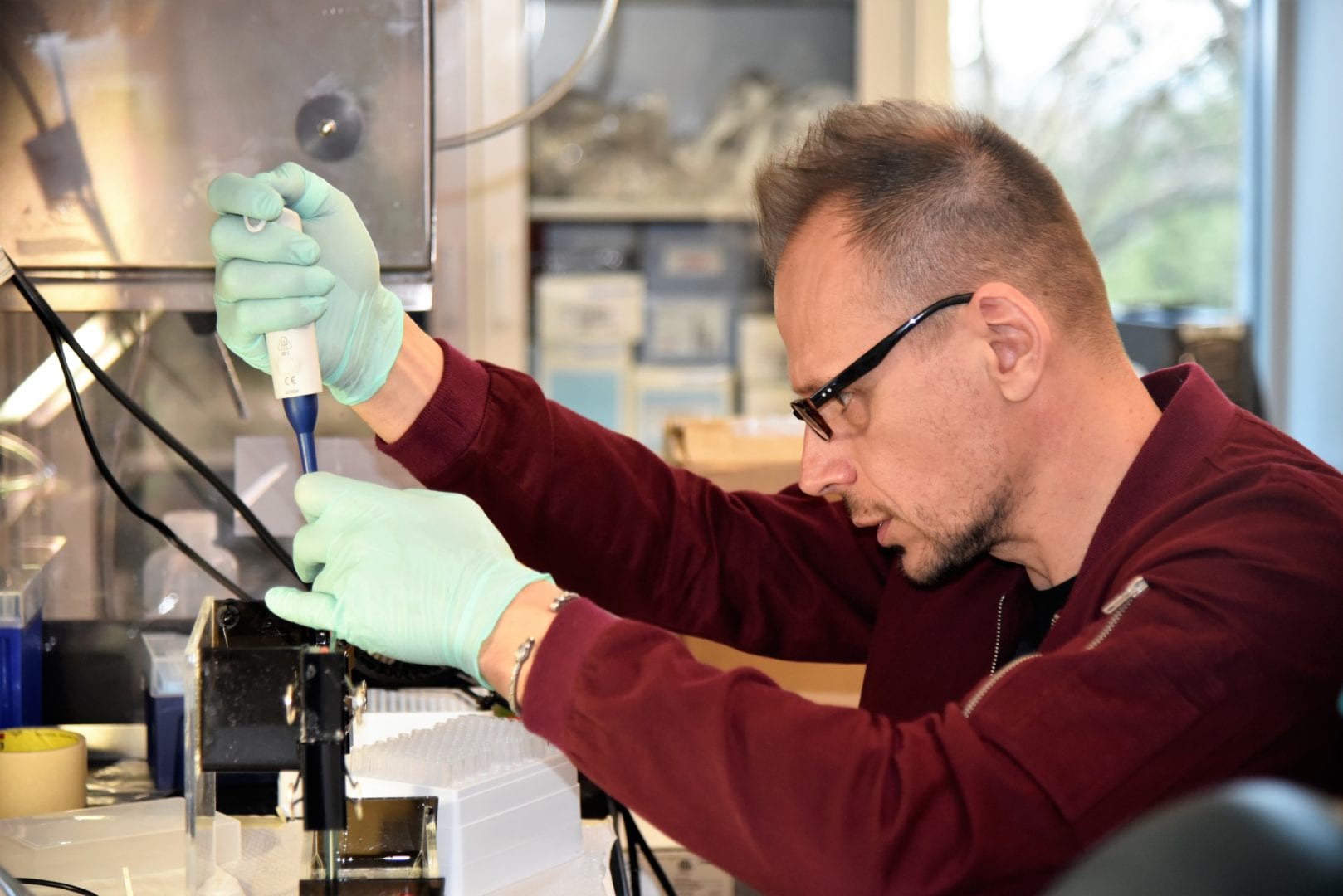 Fourteen wells, loaded with buffer, ready to go. Precise calculations of concentration and distribution, to avoid contamination. Arranging the samples as centered as possible, to make sure they run straight, as close to perfection, as humanly possible.

Olivier Loudig and postdoctoral researcher Megan Mitchell work side by side at the bench in Loudig’s laboratory at the Hackensack Meridian Health Center for Discovery and Innovation one winter afternoon, carefully plying polyacrylamide gel electrophoresis (PAGE), even as the sun sets outside the window. They are separating microRNAs out from other RNAs. The two scientists compared notes by pen, right atop the paper sheet rolled out along the bench.

The scrawled numbers, equations, and schematics are all underpinning their ongoing endeavor: to find better breast cancer biomarkers than ever before – and perhaps develop a test which would predict the disease itself.

The details are crucial. One slip, and days or even weeks of work… lost. But this is Loudig’s work in a nutshell – finding the exact crux of a problem, immersing himself in it – and then solving it. Ever since his childhood in rural France, Loudig’s attention to detail, and a willingness to look beyond “common knowledge” has driven him, from repairing motorbikes, to a major National Institutes of Health grant that could fundamentally change the way many cases of breast cancer, even other tumors, could be detected.

“The days we’re in the laboratory, everything has to go right,” said Loudig, recently, over his samples. “When it comes to making these things work, it can be all or nothing.

“We are really establishing the threshold of detection.”

Loudig was born and raised in the Vosges, the department of France along the border with Germany. The small rural village was a place where Loudig became fascinated with the way things work. This included taking apart the family’s machines – and tinkering particularly with motorbikes which he learned to deconstruct and rebuild from an early age.

Science was a natural pursuit in school. His undergraduate years were the at Henry Poincaré University in Nancy, and he pursued his master’s at the nearby Université Louis-Pasteur, at an institute overseen by Pierre Chambon, a biologist noted for discovering nuclear hormone receptors, and who is regularly discussed as a Nobel contender.

His next move was to North America, where he could better learn English – and further his scientific goals. Loudig pursued his doctorate in biochemistry at Queen’s University in Ontario, where he was a teaching assistant and then a research assistant in the Cancer laboratories. He received his Ph.D. in 2003.

FROM PARAFFIN TO EXOSOMES.

After a short stint on a remote island in the middle of the Saint Lawrence River, his postdoctoral fellowship at the Albert Einstein College of Medicine in New York City.

It was there in the Bronx, starting in 2004, that Loudig made a name for himself using formalin-fixed paraffin-embedded (FFPE) tissues. These samples were looked at skeptically by some (and overlooked entirely by others), because the nucleic acids they contained were degraded and hadn’t proven much use for large-scale gene expression analyses at the time.

But using his problem-solving acumen and his biomechanical know-how, Loudig developed ways to recover DNA and RNA simultaneously from the paraffin. He did this by designing a method to restore the degraded material, so he was able to perform microarray analyses of genes expressed in these precious specimens. The innovation was something considered by many to be, if not impossible, then certainly a waste of time because of the material degradation.

The trick was just a matter of adapting a technique to the material. As Loudig eventually discovered, there was a trove of 22-nucleotide RNAs holding plenty of data, still intact, within specimens as old as 40 years.

By finding a way to efficiently extract both the RNA and DNA from thousands of samples that had been stockpiled in labs, Loudig and his team could identify what had gone wrong at the genetic level – genes deregulated or otherwise changed – in non-invasive or benign lesions of breast samples from patients who later developed breast cancer.

Because the samples were all from years prior, the laboratory’s work allowed a full retrospective look at outcomes, with the advantage of hindsight.

By knowing what had happened to the patients represented in those samples, and being able to reconstruct the genetic basis of those outcomes, the progress of disease could be tracked backward in time, with the intent to identify novel molecular markers indicative of risk of breast cancer development.

“It’s kind of like archaeology, in biology,” said Loudig.

But Loudig went further, starting at Einstein, but continuing with his arrival at Hackensack University Medical Center in 2017.

A barcoded cDNA library protocol he developed allows for the capture and identification of the smallest pathological traces: including degraded or otherwise compromised small RNAs in minute amounts of exosomes. The development and tailoring of gene expression assays for analysis of degraded genomic DNA, messenger RNAs, and even micro RNAs has become a new venue for assessing how healthy and diseased tissues (from paraffin to blood, plasma and serums) change during pre-diagnosis and pre-development of disease.

Putting the work together – paraffin and increasingly tiny traces of biomarkers – led to Loudig’s big breakthrough in 2017: a five-year, $6.4 million grant from the National Institutes of Health, with the goal of identifying markers to predict pre-cancerous breast tissue before it becomes invasive disease.

The first huge objective: ductal carcinoma in situ (DCIS), otherwise known as “Stage 0” breast cancer. About 60,000 women are diagnosed with DCIS each year. But by some estimates, only a minority of those would actively develop invasive cancer in the decades after their diagnosis. (Patients are thoroughly treated once diagnosed with DCIS, because clinicians don’t want to take chances with which cases will or won’t develop into malignancies).

Biomarkers to determine which cases are at risk could change the game entirely. Loudig said determining which DCIS cases don’t require surgery and radiation, or even chemotherapy, would mean a huge benefit to patients, as well as medicine.

“Imagine if we can tell which patients are going to require this cancer treatment, and which ones won’t,” said Loudig. “It will be huge.”

Other projects are underway. For instance, some markers in exhaled breath itself may allow for earlier-than-ever detection of lung cancer, as Loudig and the postdoc Mitchell continue to test the thresholds.

DOWN TO THE LAST DETAIL.

Loudig not only questions everything at the bench – he also has a virtually boundless curiosity outside the laboratory, as well. It was his searching which led to his volunteering several weeks for the emergency response in the wake of Hurricane Katrina. Originally thinking he would be directly helping the victims with food or water supplies, his eagerness to “get moving” quickly instead had him put in an unexpected position: he became a roving IT manager. He drove a truck across the wreckage in the South, from Louisiana to Mississippi to Alabama to Tennessee and back again, setting up communications stations on behalf of the Red Cross. Even though that kind of technology was not his expertise at the time, his speed was noticed. He moved fast, he got things done – and he moved onto another site.

By the end of that humanitarian mission, he had a new romance. Eventually he and Lydia were married. They now live in a house in New York with their two kids, Nola and Landen.

Beyond the lab and the home, Loudig finds pursuits to fill the time. The walls of his CDI office are lined with his own paintings, and a case in the corner is loaded with medals from the grueling Spartan races he’s completed over the course of a decade. There are also the pictures of the motorbikes he’s built and rebuilt with painstaking care, to share with his growing children.

But through it all, there is a commonality: the satisfaction is getting everything right – down to the last detail.

“You could put an entire motorbike together – and one wire’s out of place and it won’t go,” said Loudig. “I want to make it go.”