Home » News » The CDI Experts: Park and Fitzgerald in the COVID-19 Era 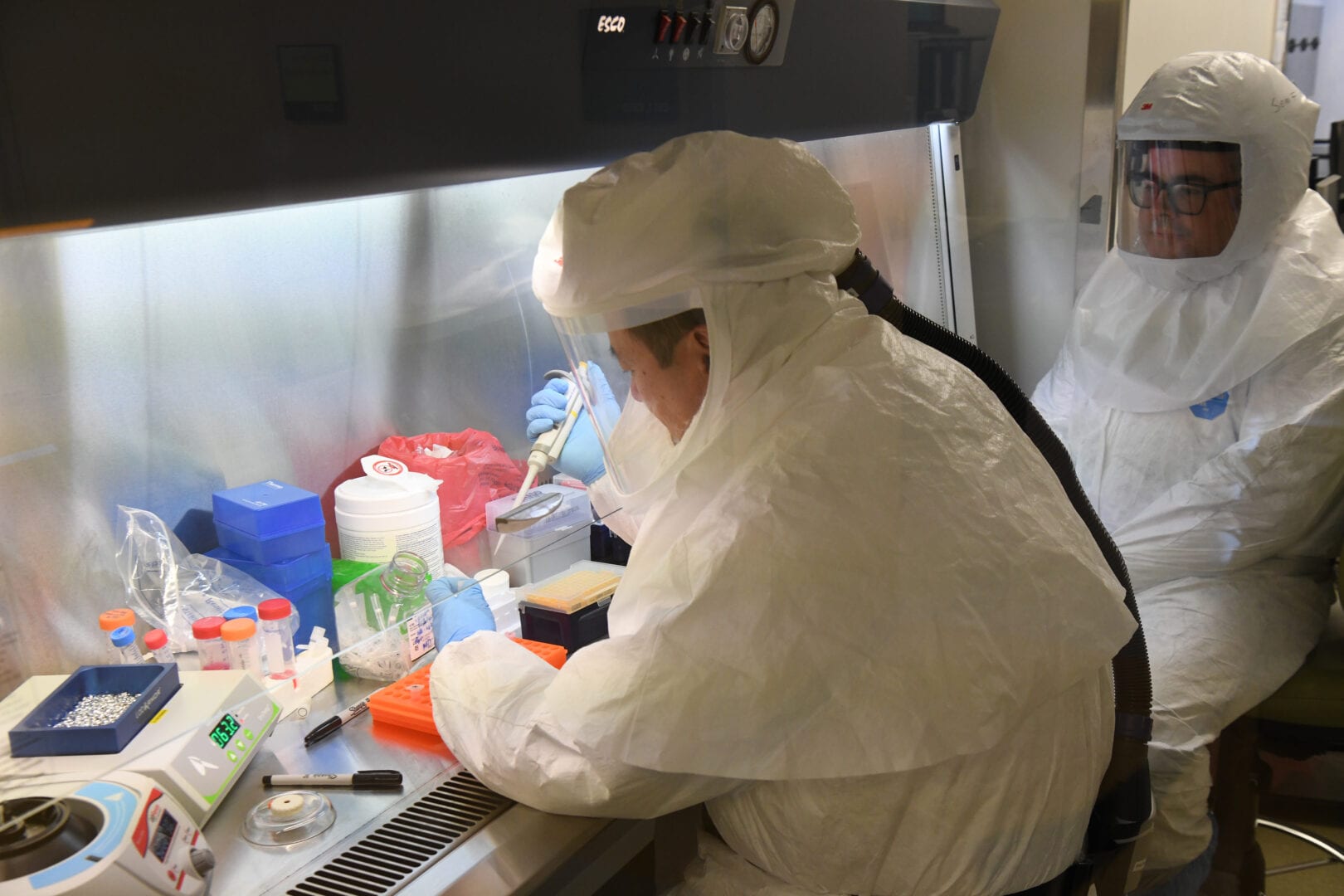 The day had come – the day of the test. A national shortage of diagnostic testing in the accelerating COVID-19 epidemic meant doctors in hotspots like the New York metropolitan area were forced to make clinical decisions without knowing nearly anything about the status of the virus in their patients. Time was ticking; the case load was growing.

Early on, Hackensack Meridian Health had a laboratory test developed by scientists from the Hackensack Meridian Center for Discovery and Innovation (CDI). The problem: obtaining the virus samples to get it validated for clinical use, and “scaling it” so it could benefit patients at Hackensack University Medical Center, the epicenter of one of the hottest of all “hot spots” of the global pandemic.

Over one exceptionally long day, Steve Park, Sean Fitzgerald and Nancy Zhao, three of the CDI experts, finalized the launch of the clinical test – and improved the pandemic response for thousands of patients. Zhao and Park helped set up and ready the machines, while Fitzgerald, an expert in biosafety operations, helped train all the personnel to safely perform virus testing on those machines.

After more than 12 hours of testing, adjustments, and exacting details, the hospital had its critical test. Park, the director of laboratory support operations, and Fitzgerald, manager of biological safety, had helped to deliver on the promise of the CDI’s “bench to bedside” science.

“That was a busy day,” recalled Fitzgerald.

But it was just one among many such busy COVID-19 days for Park and Fitzgerald, whose scientific acumen has rapidly improved the clinical side of things at Hackensack Meridian Health.

“That intensity hasn’t really died down,” said Park. “That viral test was followed by the plasma work, the antibodies, and soon enough the anti-viral drug support work. The work is never done.”

“Steve and Sean are extremely busy – and their commitment has been unwavering,” said David Perlin, Ph.D., the chief scientific officer and senior vice president of the CDI. “Their contributions to the CDI benefit not only the scientists here – but also the patients in New Jersey, and beyond.”

This virus test was a product of the expertise of Nancy Zhao, M.D., Ph.D., an Assistant Professor who directs the Perlin laboratory. By mid-February, she and the other scientists were confident their viral RNA detection method could produce a better, and more accurate, test.

But there was a bottleneck – getting a sample of the virus to finalize the work.

The CDI hosted a press conference with Sen. Robert Menendez (D-N.J.) on Feb. 28 to talk about the need for viral samples to complete validation for a test for patients.

Then came the work of the equipment and training to get the test up and running.

After the diagnostic work came a torrent of other projects. First up was identifying high-titer antibody donors for the convalescent plasma program, a clinical trial currently underway at Hackensack University Medical Center. The CDI scientists screened hundreds of survivors to identify those patients whose blood show the most promising levels of virus-neutralizing antibodies – antibodies which could be infused into sick patients. So far more than 100 patients have received the valuable infusions as part of the Hackensack-led protocol.

With virtually all the many SARS-CoV-2 projects, Park and Fitzgerald play some role in making them happen.

PARK – A RETURN TO THE PIPETTES.

Two big projects are currently helmed by Park. The ongoing antibody assessments – determining the titers, or levels, of antibodies, and the thresholds which could make plasma treatments possible – are still underway. But Park also orchestrates an antiviral drug search: a major pharmaceutical company has partnered with the CDI to assess roughly 200 drug candidates that are clinically approved or used in phased clinical trials for repurposing in the fight against COVID-19. Such treatments could be rapidly translatable, if proven effective.

Park is a longtime associate of Perlin. Raised in Hawaii, Park came to New York in his teenage years. In the beginning of his career, in the 1990s, as a New York City Department of Health intern he listened to a talk given by Perlin, who was then the Scientific Director of the Public Health Research Institute (PHRI). The two got to talking afterward.

“I got an internship. I haven’t left,” said Park, who transitioned from the now-Rutgers PHRI to the CDI with Perlin last year upon its founding.

He specialized in molecular diagnostics, animal models, and operations at the PHRI’s Northeast Biodefense Center in the wake of the 2001 anthrax attacks. Administrative functions became the main part of Park’s role over the last few years, and especially since his arrival at the CDI.

However, the scientific needs of COVID-19 crisis thrust him back in the laboratory, out of necessity. It all came back quickly, he said. Now he’s one of the primary operators in the BSL-3.

“Perlin told me, ‘It’s like you never left the laboratory,’” he said.

Fitzgerald came to the CDI after years at both the Harvard Medical School and Tulane University, the latter of which has a famed primate research center that was at one time beset by compliance issues. Fitzgerald helped put together the plan for a fix – and implemented it.

His arrival at the CDI last year meant helping the research programs get up and running.

Then the pandemic hit. Fitzgerald started as part of the Hackensack Meridian Health network’s Emergency Management Agency response team, and also as the chair of the Laboratory Task Force, even before cases had appeared in the United States.

But he was quickly pulled into all the CDI work with the virus and the antibodies which needed safety oversight. His duties are varied. He may be in the BSL-3 helping oversee Park or other scientists’ manipulation of the virus, or he may be giving small talks to hospital staffers on best practices, on any given day.

One major upcoming project: facilitating the use of one of the CDI’s BSL-3s for a major COVID-19 vaccine partnership.

The “COVID Era” – although a terrible time of upheaval and loss – has professionally been an exhilarating challenge, he said.

“There’s no routine – every day is different,” he said. “It gets right to the point of why I started doing this.”