Home  ›  News  ›  In the Media  ›  The CDI Experts: Butler and His Lab Investigate Blood Aging, Cancer 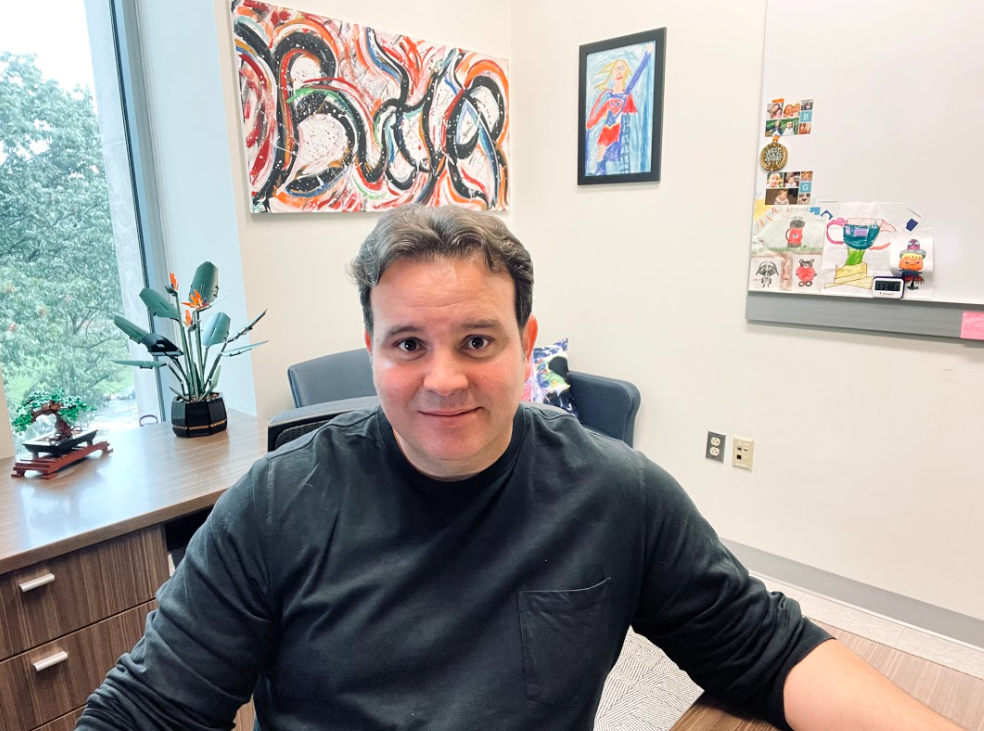 Blood is made of cells that sustain life, and virtually all biological processes. But as the blood cells start to develop problems over time, the body follows suit. That is aging.

Jason Butler, Ph.D., and his laboratory are looking into the fundamentals of aging at the very foundations of the cardiovascular system – and they are finding new ways to keep that system healthy, with implications for cancer treatments, organ transplants, and many other diseases and their treatments.

“The common denominator for all age-related disease is cardiovascular dysfunction,” said Butler, director of Stem cell Therapeutics at the Hackensack Meridian Center for Discovery and Innovation (CDI), and also an associate professor at the Hackensack Meridian School of Medicine. “The thrust of our work is to make the blood system age healthy… The adage holds true: you’re as old as your arteries.”

The Butler Laboratory was the first to set up their science at the CDI, moving into the Nutley campus in 2018. But by then they had already made a significant splash into this new understanding of the foundations of the blood system.

“Jason Butler and his team are doing work that has real-world applications in the very near future,” said David Perlin, Ph.D., chief scientific officer and senior vice president of the CDI. “This is exciting work, and he is continuing to push the envelope in a critical discipline.”

Butler and colleagues Mike Poulos, Ph.D., and the rest of the laboratory (then at Weill Cornell Medical) published a paper in the Journal of Clinical Investigation in 2017 which upended some of the widely-accepted knowledge of hematopoiesis (the creation and maturation of blood cells). The paper showed that aged endothelial cells, those that line the blood vessels and serve as intermediaries between tissues and blood, have a significant influence on stem cells.

For the first time, Butler and colleagues showed that the aging process led to endothelial cell dysfunction that interfered with their instructive capacity to support blood stem cells. Utilizing these findings, they were able to harness the therapeutic application of young endothelial cells to rejuvenate older stem cells.

This finding is the foundation of the ongoing work, investigating variations upon the mechanisms within the bone marrow, and the foundational creation of blood cells there. Butler, Poulos, colleague Pradeep Ramalingam, M.D., Ph.D., and the other scientists in the laboratory have developed two models mimicking the aged bone marrow microenvironment, allowing them to use it as a screening system. They can observe and manipulate dynamics and interventions in the aging process in these models.

“The overall goal is to define what goes wrong with the aging vascular system – and correct it,” said Butler.

One example of that corrective action in cancer patients: a 2020 publication in Nature Communications showing how reversing some runaway inflammation in the bone marrow could mean a major breakthrough in certain cancer treatments. The scientists demonstrated the function of two connected pathways involved in myelosuppressive injuries (like those caused by chemotherapy), in which bone marrow activity decreases, leading to less blood cell production.

It’s a complex chain reaction, triggered by treatments themselves. The myelosuppression leads to chronic activation of the mitogen-activated protein kinase (MAPK) pathway – causing local and systemic inflammation, in turn driven by the Nuclear factor-kB (NF-kB) signaling pathway. This chronic inflammation resulted in disruption of the integrity of blood vessels and functional defects to the hematopoietic stem cell.

“We can make their blood system stronger, and patients can recover better, and more quickly,” said Butler.

But the possibilities extend far beyond just one compound or one pathway. He envisions a kind of “rejuvenation cocktail” which may heal the body at molecular levels after the rigors of chemotherapy, and get cancer patients out of the hospital faster.

From Florida to Manhattan

Butler grew up in Florida with dreams of being a science teacher. But it was a series of mentors after high school and along the way to his degrees which pushed him toward laboratory work. At community college his mentor’s prowess started him on a path to zoology. On the way, and to fulfill an undergraduate college curriculum requirement, he got his first taste of bench science. He never looked back.

“I cloned that first gene, and I was hooked,” he said.

Once he embarked on his own research interests, he focused on the burgeoning field of blood stem cells – particularly as they related to the cardiovascular system and its foundations. It was a marriage that clicked, which led to a paradigm shifting publication in Cell Stem Cell in 2010 demonstrating that endothelial cells were not just passive conduits that provide oxygen and nutrients to surrounding tissue, but also function as the primary blood stem cells home, or niche, that nurtures and supports the proper function of the blood system. Since that publication, the Butler lab has been discovering the way all the pieces of the blood and cardiovascular system fit together.

After a successful stint at Cornell, at which the core members of the current group came together, Butler decided to join the newly-formed CDI.

“We came here, because it was exciting to build something from the ground up – to be one of the founders,” said Butler. “David’s vision is to take what we’re doing on the bench to the bedside as quickly as possible. That’s an incredible opportunity.”

Butler lives in Manhattan, and his free time is spent with family as much as possible – particularly his daughters, ages 6 and 10. Although the girls’ birthdays often fall during times of important conferences for his field (like the American Society of Hematology annual meeting and the International Society of Experimental Hematology Conference) he finds a way to celebrate with them on “second birthdays,” with extra presents. He relishes taking part in their sports, riding bikes, or fishing together in the Catskills as frequently as he can.

“Kids are the most important thing,” he said. “It’s great to work hard, but family is what makes us who we are.”