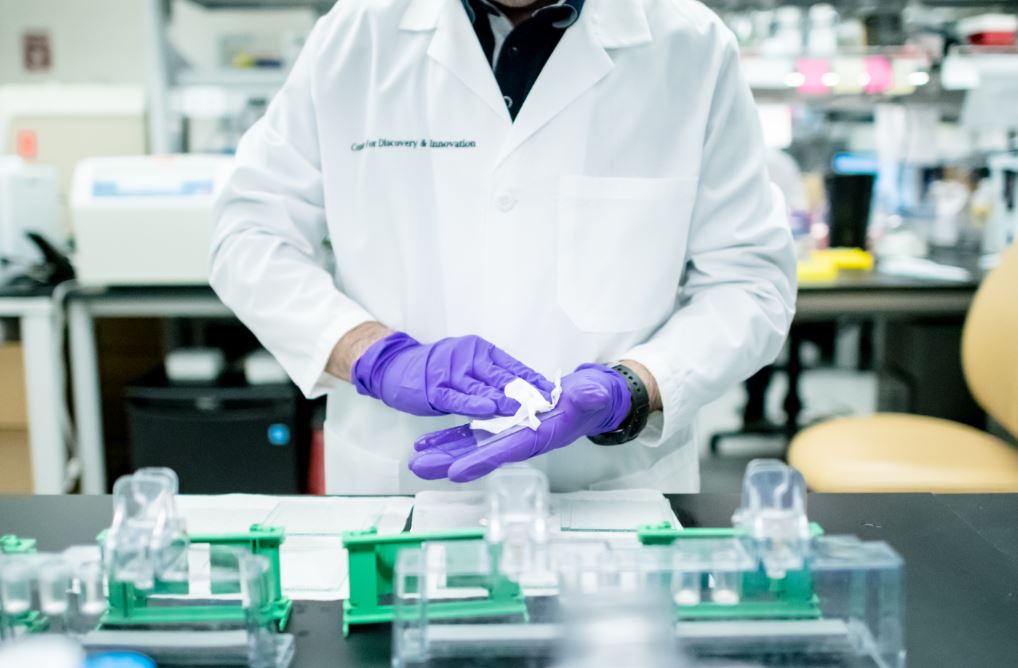 The secret to melanoma’s metastatic spread could be a complex natural pathway it hijacks – one which may be a therapeutic target in combination with other targeted therapies and immunotherapies, according to new research published by Hackensack Meridian Center for Discovery and Innovation (CDI) scientists.

The laboratory of Byungwoo Ryu, Ph.D., and colleagues at the CDI demonstrated the pathway centered around a bone morphogenetic protein known as BMP6 might be the main way melanoma seeks to take over the body, according to the publication in the journal Molecular Cancer Research.

“Metastasis is the main reason cancer patients die,” said Ryu, an associate member of the CDI, and also a research member of the Georgetown Lombardi Comprehensive Cancer Center, of which Hackensack University Medical Center’s John Theurer Cancer Center is part. “If we can prevent cell motility, we can prevent cancer from spreading – and save lives. That is what we are aiming to do through our science.”

“This is good work by the Ryu laboratory, and the findings are therapeutically relevant for melanoma, in terms of preventing metastases in the future,” said Benjamin Tycko, M.D., Ph.D., member of the CDI and also an author of the paper. “This is the kind of translational work that could be a veritable boon for patients in the near future.”

Melanoma starts as a localized lesion – but once it reaches the point of metastasis, it becomes a killer: just 27 percent of the patients who reached stage 4 of the disease survive, even with the latest immunotherapies, according to the American Cancer Society.

Cancers are all known to take over natural processes of the body in order to promote their spread. Ryu and colleagues identify perhaps the main culprit in the spread of melanoma: the silencing of a protein known as BMP6 (bone morphogenetic protein 6).

In a complex chain reaction, the BMP6 is silenced by an epigenetic “eraser complex” known as SIN3A-HDAC1/2 fostered by the cancer. The lack of BMP6 expression then cascades into abnormal silencing of an intracellular signaling pathway mediated by a protein called SMAD5 (Small Mothers Against Decapentaplegics 5). The ultimate effect downstream is the aberrant over-production of yet another protein, FAM83G/PAWS1.

This final step is exactly what the cancer seeks to spread beyond the initial lesion: since the FAM83G/PAWS1 promotes cancer cell motility and cell migration, it allows the cancer cells to spread more quickly through the body, as Ryu and team demonstrated in an animal model of melanoma metastasis using clinical skin cancer samples.

The molecular “chain reaction” connections were shown through the use of a noble small molecule compound called Corin, developed in the lab of Philip Cole, M.D., another one of the authors on the paper, from Brigham and Women’s Hospital and Harvard Medical School. The Corin was synthesized in Cole’s laboratory to inhibit HDAC1/2 and KDM1A – meaning it cuts off the cascade right at the beginning with the “eraser complex” at the start, before BMP6 is impacted.

“We showed that, using the Corin, the cancer was not actively spreading and proliferating in the model,” said Ryu. “We believe the compound could be a therapeutic agent that could be extremely effective in combination with other clinically approved melanoma drugs. It could make a big difference for keeping the cancer cells from spreading and recurrence.”

The Ryu laboratory is conducting follow-up work using cutting edge technologies such as transcriptome and proteome analysis and building a better metastasis model. Two questions they hope to answer in the laboratory: how the FAM83G at the end of the epigenetic cascade resulting in metastasis regulates the intrinsic machinery of cell motility that cancer cell hijacks for spreading  – and whether this FAM83G itself is a viable target for preventing melanoma from spreading, perhaps via adjuvant drugs in combination with other molecularly targeted therapies.

Additionally, the team is investigating other epigenetic “eraser complexes” such as CoREST and NuRD complexes which may be involved in metastatic cancer development and therapy resistance.

“This is the kind of bench science which promises great bedside benefits in the future,” said Ihor Sawczuk, M.D., FACS, the chief research officer and president of the Northern Region for Hackensack Meridian Health. “The CDI’s work is an investment into the health of our years to come.”