Home » News » The CDI Experts: Renowned Scientist Korngold, at Retirement, Looks Back Over Decades of Breakthroughs 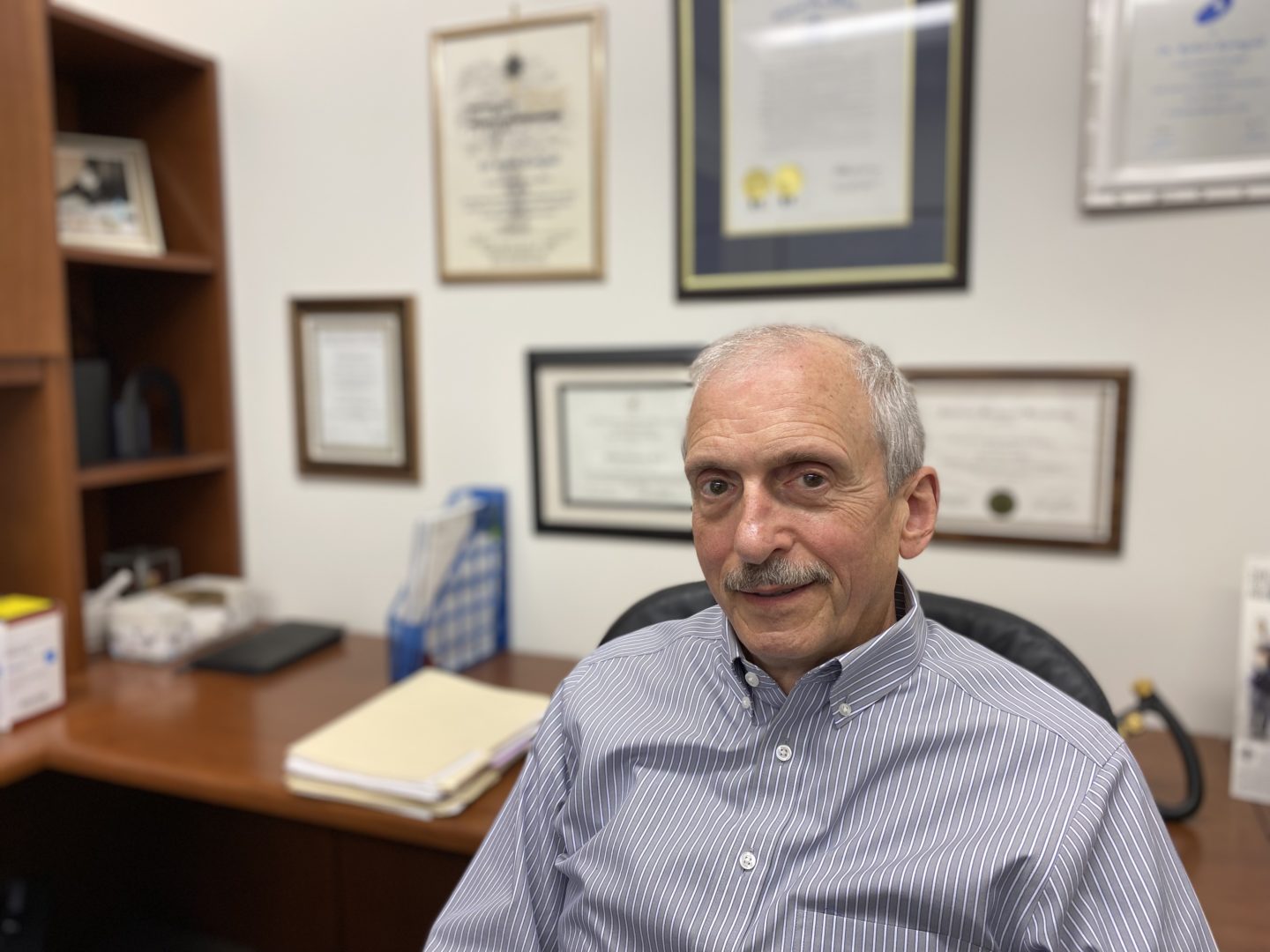 For many, a working life is a series of jobs. For others, there is a vocation – a particular calling with the intention to break new ground, blaze new trails.

Immunologist Dr. Robert Korngold, Ph.D., the deputy director of the Hackensack Meridian Center for Discovery and Innovation (CDI), is at the cusp of retirement, effective the end of this year. And he looks back over a vocation that inarguably left untold lives changed for the better.

Korngold took detailed, painstaking looks into the complex warfare between relentless cancers and the human immune system, especially in graft versus host disease (GVHD), which are harmful body reactions to bone marrow transplants that are crucial for cancer treatments and recovery. Most recently, he helped lay the very foundation of the CDI – which now houses scientists who have taken his scientific baton.

Science beckoned from the earliest stage of his career because of its promise in effecting change. Korngold feels he’s made a difference – and his colleagues certainly agree.

“I wanted to affect people – I wanted to fight disease,” said Korngold recently, in his CDI office. “Through research you could help thousands – that’s what I thought. I like to think now that I did just that.”

“His career has been brilliant, and greatly shaped science and medicine,” said David Perlin, Ph.D., the CDI’s chief scientific officer and senior vice president. “His contributions to the start of the CDI remain critical. I wish him the very best in the next phase.”

“Bob Korngold is one of the key talents who helped make our network what it is today,” said Robert Garrett, CEO of Hackensack Meridian Health. “He has left medicine, and patients, better for his years of discovery and innovation.”

AN EARLY START ON GVHD

Korngold grew up in Passaic, and went to Rutgers University for his undergraduate degree. As a junior, a human immunology course fueled his inspiration – so much so that he stayed on an extra year for a master’s degree, to work in an immunogenetics laboratory and to strengthen his scientific background.

The dynamics of the immune system seemed to dictate virtually everything about human health – with gargantuan implications.

“Immunology is so fascinating – because it’s at the center of everything,” the scientist added. “That’s how my career developed in the way it did.”

His career made a big splash, right in the first few years.

The University of Pennsylvania was his destination for his doctorate in immunology. His thesis: “T Cell Response to Minor Histocompatibility Antigens In Vivo” – a rather novel topic at that time, since T cells were a relatively new discovery, and their function was not nearly as well understood as it is now, especially in GVHD.

“It just clicked together in my mind – you look for diseases that haven’t been cured yet,” he said. “It seemed like this is where I could make a difference.”

His mentor was Jonathan Sprent, M.D., Ph.D., an Australian immunologist. Their collaboration would mark a major milestone. It focused on the role of allogeneic (outside) donor T cells and what barriers could prompt the development of GVHD. This was critical work at a critical time; in the late 1970’s, it was unclear what caused this disease in transplants between what were thought to be closely-matched siblings. The initial work produced novel animal models providing the evidence needed to support the use of T-cell depletion to prevent GVHD in clinical settings.

The resulting paper in the Journal of Experimental Medicine in 1978 became somewhat of a watershed; in 2008 it was recognized as a “classic” paper and one of the top ten most cited articles in that journal for the previous 30-year period.

His subsequent postdoctoral stint was at the Wistar institute, working with Nobel Laureate Peter C. Doherty, A.C., F.R.S. FMedSci, another Australian immunologist. Korngold focused on the thymus, where T cells are produced, and how it influenced the T cell’s ability to recognize viral antigens.

“These studies helped our understanding of how host elements in the thymus could control how T cells developed their T cell receptors in terms of what they could recognize,” Korngold said.

But GVHD continued to be the main thrust of his research. On the strength of his thymus work, Korngold established his own laboratory at the Wistar Institute in 1982. Korngold received an NIH grant to study GVHD which he would retain for 29 straight years. Working again with Sprent, the pair published throughout the 1980s, defining the biological roles of CD4 and CD8 T cell subsets in causing GVHD. The work’s climax was a 1987 paper, also in the Journal of Experimental Medicine, which laid the groundwork for studies involving these cellular subsets spanning across a variety of disciplines – and the observations helped serve as the basis for selective T cell subset removal in clinical trials conducted at several institutions.

Starting in 1987, Korngold moved his laboratory to Jefferson Medical College, of Thomas Jefferson University. Soon after the Sidney Kimmel Cancer Institute at TJU was created and Korngold became the founding director of the Immunology Ph.D. graduate program. He would spend the next 17 years continuing to work on the immunobiology of GVHD but also on the development of small peptide inhibitors of T cell activation, with potential applications to GVHD and several autoimmune diseases, like multiple sclerosis.

Together with other members of the laboratory, they were able to dissect the roles of both CD4 and CD8 responses responsible for GVHD, and to develop better models for acute myelogenous leukemia to study how donor T cells could be manipulated to generate graft-versus-leukemia (GVL) responses with minimization of GVHD.

But Korngold wanted to have access to more, and better, clinical samples to drive the science further. So – despite having earned tenure at Thomas Jefferson – Korngold came “back home,” of sorts. He took his work to Hackensack University Medical Center, just about six miles from his hometown of Passaic.

In 2004, the single hospital was building a renowned bone marrow transplant program. Korngold brought the latest science to help it get even better. There were some “growing pains” – since he was the first scientist there to have NIH R01 grants, and it took some time to learn how to fit science into a clinically-focused institution.

But it paid off, resulting in important and well-received publications in the Journal of Immunology, and the Biology of Blood and Marrow Transplantation, among others.

“As we’ve learned over the last 25 to 30 years, it’s a balancing act,” he said recently. “It has remained a problem we have to fight in each patient. But now clinicians have so many more tools to work with, and they are helping people recover better – or even steer clear of GVHD entirely.”

The CDI began to take shape with meetings beginning around 2015, and Korngold, as one of the most well-regarded scientists in the network, took part in its planning.

Korngold has been deputy director since the CDI’s inception in 2019. He has also been a major part of the recruitment efforts to bring in scientists to strengthen the cancer research base of the institute.

Korngold’s achievements are those which accumulated over years of diligence, and persistence. Ultimately, he amassed 125 peer-reviewed publications, 43 book chapters and monographs, and eight patents. Distinctions have followed: in 2016 he received both the Lifetime Achievement Award from the American Society for Blood and Marrow Transplantation, and also and the Edward J Ill Outstanding Scientist award.

OPPORTUNITIES, AND A LOSS

Not everything has been a huge win, however. Korngold can look back on some lost opportunities and setbacks throughout his long career. There was a CD4 inhibitor worked on with colleagues which ultimately failed to get key pharmaceutical interest – though he remains convinced that it could have been a vital help in treating multiple sclerosis (MS).

Korngold was also named an associate dean of research for the beginning stages of the Touro University College of Medicine – but that school never fully took shape, ultimately.

He is also a co-investigator on clinical work which remains unfinished to date: cell therapies which may present a key way to stop inflammation, and damage in Type 1 diabetes and amyotrophic lateral sclerosis (ALS).

It was the biggest loss which inspired this last line of research. His wife, Thea Friedman, Ph.D., who was his research partner in the laboratory, passed away in 2012 after a long battle with ALS. Friedman was given the latest treatments then available – but nothing could stop the progress of the disease.

The work he helped as co-investigator he’s hoping will make a difference in patients of the future.

“It’s a terrible disease,” said Korngold. “I’m hoping this work will continue on, and make a big difference in helping to improve, or even save, lives of the future.”

“Bob and Thea’s arrival really transformed the cancer center,” said David Siegel, M.D., chief of the Myeloma Division at John Theurer Cancer Center at Hackensack University Medical Center, and founding director of the Institute for Multiple Myeloma at the CDI. “They were the first true scientific colleagues we had.

Some parts of Korngold’s retirement plans might seem familiar.

He’s moving down to Naples, Fla., for a warmer climate that’s just a block away from the Gulf of Mexico. He remarried in 2014, and he and his wife plan to do a lot of traveling. His grown son and family lives in the Philadelphia area, and his adult daughter and family lives in Chicago; Korngold has two granddaughters between them. In addition, his step-son recently married in Chicago and other step-son lives in Los Angeles.

But the travel bug also includes likely trips to Italy and Israel, two of his favorite destinations worldwide.

Exercise and a conscientious attention to health will continue to be key to his routine. Those around the CDI campus with the Hackensack Meridian School of Medicine campus are likely to have seen his constitutionals down the skybridge connecting the two buildings over the last two-plus years. Korngold plans to keep up with that, but also with hiking, biking, and pickleball. Training his brain will involve playing chess (virtually) against his son and his brother in Georgia.

He also plans to keep himself sharp by following the many developments that the CDI, and his scientific legacy, promise to bring in the near future.

Because Korngold is both realist, and optimist, in evaluating the odds between the human immune system and cancer. The struggle is incredibly complex – but there have been many inroads made, and Korngold is optimistic that science will continue to make progress against what has been called the “emperor of all maladies.”

“It’s like a war – it’s a battle zone, a complex environment,” he said. “But when I started, T cells had just been discovered. So we have come a long way in a few short decades.”