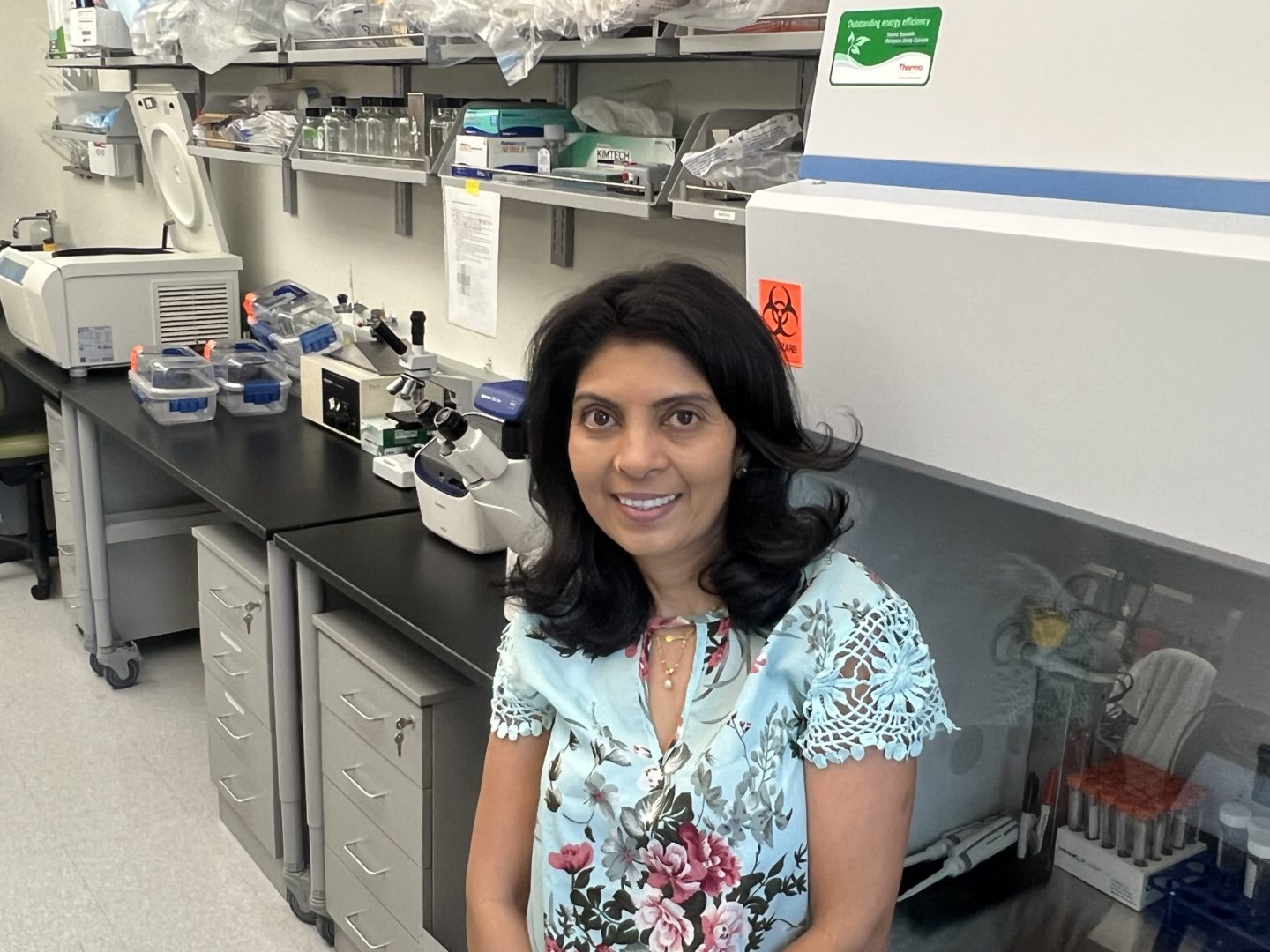 Fat is basically a dirty word in the modern era. But when it comes to biological reality, it is a critical factor in mammalian health. In many humans, fat is the second largest organ, smaller only than the skin.

For Jyothi Nagajyothi, Ph.D., this is a frontier in the battle against almost all diseases.

Nagajyothi, a member of the Hackensack Meridian Center for Discovery and Innovation (CDI), focuses on the fat (adipose) tissue, and the role it plays in disease progression, severity and recovery. From the vector borne-parasitic Chagas disease to airborne-bacterial tuberculosis, from COVID-19 to leprosy, to cancers and diabetes, the scientist seeks to better understand how this ocean of adipose tissue making up the human body modulates inflammation and other dynamics – driving ultimate outcomes.

“Jyothi is an innovative researcher who is helping to lead our emerging understanding of how adipose tissue and its signaling to the immune system influences health and disease,” said David Perlin, Ph.D., the CDI’s chief scientific officer and senior vice president, who is also a professor at the Hackensack Meridian School of Medicine and the Georgetown University School of Medicine. “Our institution is richer for having her do her work here, where it complements so many other avenues of inquiry.”

OF FATS AND DISEASE

One of her key discoveries thus far: that adipocytes and adipose tissue serve as a reservoir for many pathogens, including SARS-CoV-2, which can be a risk factor in the development of metabolic syndromes such as obesity and insulin resistance. The work has also opened a link between the pathogenesis of Type 2 Diabetes Mellitus, cardiovascular diseases and severity of acute and chronic infectious diseases, all major causes of death in both developed and developing countries.

Fats provide nutrition – and sometimes fortifications – from which disease can persist and continue to attack the body. For instance, tuberculosis uses the lipids in the fatty microenvironment to defeat the body’s immune system, in a long war of attrition.

One infectious disease which is a key bellwether of this dynamic is Chagas disease, the parasite-spread infection which remains asymptomatic even as it causes long-running damage to the hearts of unsuspecting patients. Spread through the feces of the kissing bug, the disease is a scourge in Latin America, where an estimated 8 million people are infected, according to the U.S. Centers for Disease Control and Prevention (CDC). Nagajyothi’s work with colleagues has shown an exacting dynamic of how the parasite damages the heart, long-term, via adipose pathways. The team has also started to point the best way forward for clinicians to  offset such damage. For one, it appears high-fat diets early in the infection can be protective, despite what logic may otherwise dictate.

Chagas became an especial focus almost by accident, while she was a postdoc at Albert Einstein College. She overheard a cafeteria conversation about the pathogen, which ultimately led to her starting a conversation with the scientists, ultimately leading to a collaboration.

Her research combined her expertise with fat, showing how the disease was impacted by adipose tissue. As it turned out, Chagas was a great example of showing fat dynamics in an infection. She vividly recalls first glimpsing the parasite itself, Trypanosoma cruzi, under the microscope.

“The first time I saw T. cruzi, I actually felt scared,’ she said, chuckling recently at the memory. “It was like small snakes wriggling around. It was a sight.”

The lab has also studied the infectious disease at the global forefront these last two years: COVID-19. She and the team, using animal models, showed that pre-existing Chagas infection may actually be protective against COVID.

Overall, fat is not a bad thing in all cases – and it can actually be helpful in modulating disease.

“There’s a similarity between these diseases – COVID, TB, and Chagas,” she said.

The Nagajyothi lab has recently made a big pathway discovery: that the adipogenic adipokine called adiponectin, which impacts glucose levels and fatty acid breakdown, acts as a “double-edged sword” in health and disease. This has opened up new dimensions in understanding the feedback mechanisms of adipomes and adipokines in regulating immunometabolic pathways in various infectious and non-infectious diseases. Diabetes and its metabolic changes play factors in TB and other diseases, in key ways.

In addition, her lab is studying the immunoregulatory effects of diet and metabolic drugs on adipocytes and adipose tissue pathology and its consequences on the progression and severity in diseases including metastatic breast cancer.

In other afflictions, losing a lot of fat via dramatic weight loss can sometimes “activate” diseases which were otherwise stable or asymptomatic when surrounded by fat.

Adipose tissue, it seems, has so much of a part to play in virtually every battle the human immune system may face. And Nagajyothi is aiming at unlocking its secrets.

“Fat is not just my bread and butter, it is my fortune/serendipity,” she said. “The ultimate goal is to completely understand the fat/pathogenicity interaction.”

INDIA, GERMANY, THE U.S., BEYOND

Nagajyothi was born and raised in a rural small town in the south of India. It was a very conservative society, where girls were placed into arranged marriages shortly after the age of 18.

But her parents were set on her having an education of her own and becoming accomplished, encouraging her to pursue her studies and to play sports unlike many other girls. She was the only daughter of her older parents, so she was very protected – she was even still holding her father’s hand to cross the street in her mid-20s, as she recalls now.

But she pursued education. That’s what led her to continue her way out into the world: first her degrees in India, then a fellowship in Germany, and a burgeoning career in the United States since 2001.

Now married and living in New Jersey, her two children are finding their own paths and careers in other parts of the U.S.

The fundamental curiosity – of questions leading to yet more questions – is what drives her constantly forward.