Home » News » The CDI Experts: Zhang Looks to T-cells to beat Cancer at its Own Game 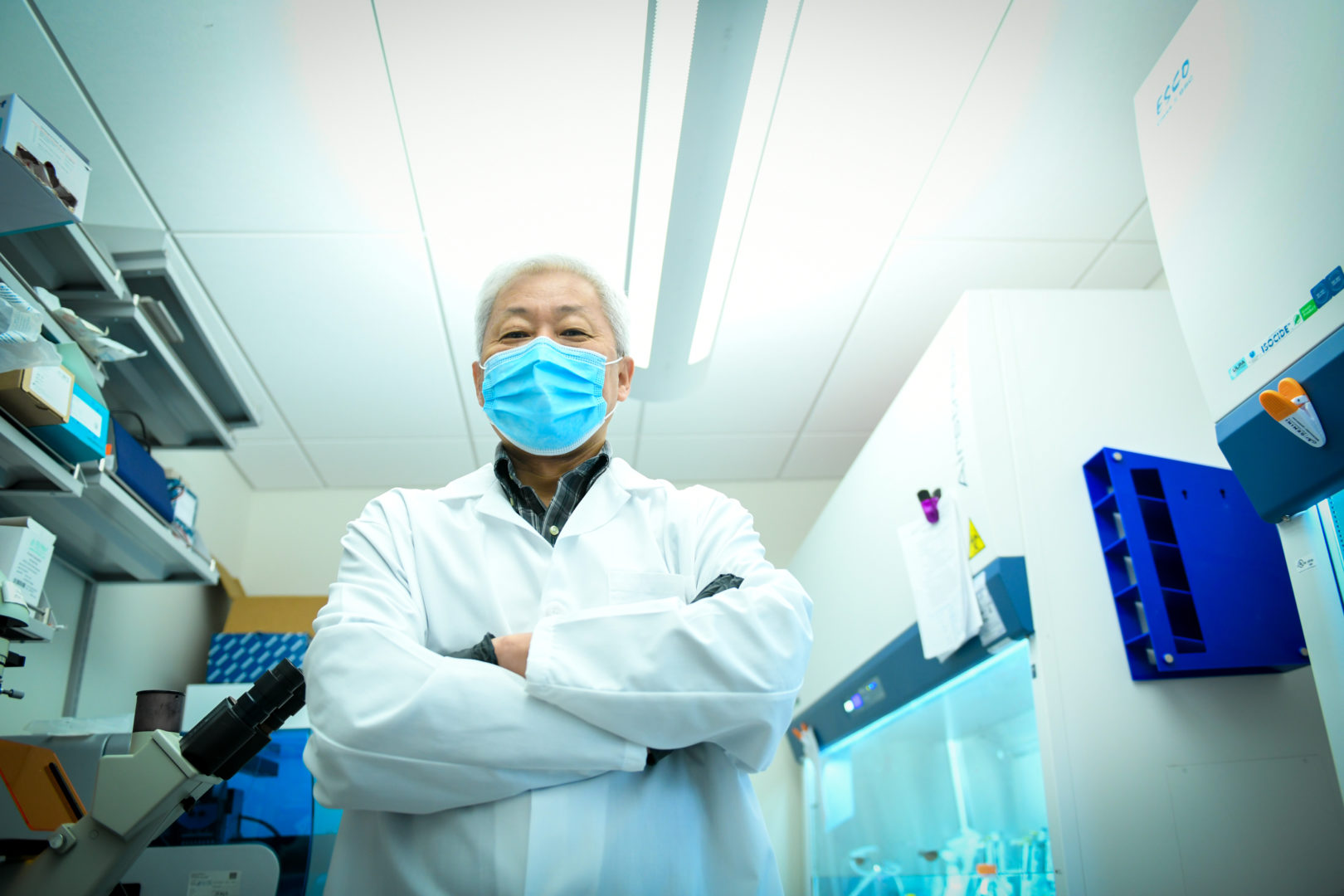 Cancer works by hijacking the biology of its host. The hijacking can be so complete that cancer even sabotages the body against treatments involving life-saving transplants, and those using the body’s own natural immune system.

Yi Zhang, M.D., Ph.D., one of the newest scientists at the Hackensack Meridian Center for Discovery and Innovation (CDI), is studying how T lymphocytes (T cells), which are a critical component of the human immune system, contribute both to disease development and can be harnessed to cure cancer. He and his lab are pushing the envelope of this scientific niche toward several goals: cracking the riddle of transplant rejection; and creating novel drugs to boost immunotherapies against the cancer itself.

It’s a new frontier for molecular medicine – and the possibilities are great. While T cells can unlock the potential of immune response to cancer, it is also the factor underlying harmful inflammation (and transplant rejection). Understanding these tipping scales can provide breakthroughs in multiple fields, says Zhang.

“T cell immunity is a double-edged sword. Better understanding T cell biology is obviously important for not only understanding pathogenesis of many diseases but also for the development of novel approaches for disease treatment,” said Zhang recently.

“The work of Yi Zhang is exciting and potentially transformative for immune intervention in disease,” said David Perlin, Ph.D., the chief scientific officer and senior vice president of the CDI. “We are fortunate to have brought him to the CDI, which is now becoming a destination for T cell biology discovery and innovation.”

The work Zhang brought to the CDI last year continues to forge forward in three critical ways: in understanding graft-versus-host disease (GVHD), colloquially referred to as “rejection” of a transplant such as hematopoietic stem cell transplants (HSCTs) for certain blood cancers; the potential of a whole new cell therapy concept to battle back against GVHD; and creating novel molecular compounds to sensitize tumors/accentuate the effects of cancer immunotherapies.

T cell-based therapies are incredibly promising in oncology and other clinical applications; this is most prominently seen in the chimeric antigen receptor (CAR) T cell cancer therapies, in which labs tweak these natural immune defenders to seek out and kill cancer cells.

But the T cells, as Zhang mentioned, can sometimes be the problem leading to serious disease such as GVHD.

The scale can tip easily. A variety of these cells known as inflammatory effector T cells can cause the destruction of normal host tissues (such as graft-versus host disease and type 1 diabetes), whereas T cells with impaired memory potential are conversely unable to clear chronic infections or tumors.

Zhang and his team are looking at a bustling immune-system environment, where everything is connected, and prone to feedback loops.

First, they’re looking at the mechanisms of GVHD itself. For instance, the Zhang lab identified that Ezh2, a chromatin-modifying enzyme, is critical in regulating immune-memory formation and recall response of activated T cells. The scientists also discovered that Hsp90, a chaperone protein that helps its proteomic counterparts fold correctly, is required to maintain Ezh2 protein stability in activated T cells. Inhibiting the Hsp90 destabilizes the Ezh2 protein in activated T cells – and thus may ultimately reduce GVHD. This major discovery was a cover story in the influential journal Blood while Zhang was at the Fels Institute at Temple University.

Secondly, a parallel track toward combatting GVHD could be plasmacytoid dendritic cells (pDCs), which the body can’t make them under the conditions presented by GVHD but are critical for immune protection and tolerance.

The Zhang approach is to better understand the relative levels of these pDCs when patients are beset by GVHD – with an eye toward earlier diagnosing the condition, and then eventually developing treatments.

“Further defining the impact of human pDCs on alloreactive T cell responses will be important to establish pDC-based therapy to inhibit GVHD and modulate other T cell-mediated inflammatory disorders in a broad context, such as autoimmunity, food allergy and organ transplantation,” said Zhang.

Thirdly, the lab is working on creating novel molecular compounds to sensitize tumors to, and/or accentuate the effects of, cancer immunotherapies including activated T cells.

PURSUING KNOWLEDGE ACROSS THE GLOBE

Zhang’s move from Temple University to the CDI last year was perhaps his shortest relocation in his pursuit of science.

Zhang grew up in Suzhou, China – an ancient city with a history of more than 2500 years about 100 miles west of Shanghai. (His parents and a brother still live there). He attended Suzhou Medical College to study medicine and immunology, and did his residency at the No. 2 People’s Hospital of Suzhou as a pediatrician.

But immunology’s fundamental questions fascinated him from the outset.

“Immune cells and immune responses not only provide protection of human beings from diseases but also cause immunopathology,” he said recently. “When I was a pediatrician in clinic, I saw many patients troubled by various types of immune diseases… some life-threatening.

“However, our understanding of immune cells and immune responses and their-mediated diseases was very limited dating back to the early 1980’s,” he recalled. “This drew the interest that has defined my career so far.”

Zhang thus went to Japan in pursuit of deeper knowledge – and in particular to follow his mentor, Dr. Kouji Matsushima. Matushima is a pioneer who established the field of chemokines – the family of small signaling proteins that direct the migration and infiltration of leukocytes and many other types of cells (such as endothelial cells and epithelial cells). The proteins are fundamentally important for regulating immune responses, inflammation, morphogenesis and wound healing – as well as in the pathogenesis of diseases like cancers.

“Dr. Matsushima’s great achievements attracted me to study under his guidance,” said Zhang.

After a period back in Suzhou doing clinical work and research, Zhang found his way to the United States. American progress in the field of immunology and immune diseases meant Zhang would find the best environment to drive his work forward – in the lab.

“My clinical work told me there is a need for me to study basic science to fill the knowledge gap,” he said.

A stint at the University of Pennsylvania, in the labs of Dr. James Wilson and Dr. Stephen Emerson, gave him some grounding in American science. He learned stem cell biology, transplantation immunology and scientific writing from Emerson, and gene therapy from Wilson. Emerson also helped Zhang establish a career in studying pathophysiology of allogenic HSCT and cellular therapy.

Zhang’s career high point up until now continues to have ripple effects more than 15 years later: the introduction of the very concept of stem-cell memory T cells in sustaining alloreactive T cell responses and GVHD. It was a finding that he and the U-Penn team published in the journal Nature Medicine in 2005. Since then, there’s been two Zhang patents and a cascade of further inquiry – like the Ezh2 role in memory formation, and related pathways.

“This concept has prompted many other groups to develop novel strategies for improving the efficacy of cancer immunotherapy, including CAR T cells,” said Zhang. “My laboratory has made a continuous stream of novel fundamental contributions in the field of alloimmunity and tumor immunity.”

The ultimate goal is to develop novel cell-based therapeutic approaches to these two problems: GVHD in patients undergoing allo-HSCT; and finding a way to boost CAR-T cells and immunotherapies to better fight tumors.

AMBITION – FOR THE BETTER OF SCIENCE

It’s ambitious. But Zhang remains cognizant that cracking the T cell riddle will require many hands, and much work. Equally important to the publications and patents is the mission of training more scientists studying immunology, allo-HSCT biology and cancer immunotherapy.

“Their success is not only important for providing the next generation of researchers but also for development of novel technologies to improve the efficacy of cancer immunotherapy,” he said.

Outside the laboratory, Zhang also continues to educate himself widely: about his new environs of New Jersey through hikes locally; and about the world through a steady diet of reading. He and his wife have one son.