Research in the Loudig Lab 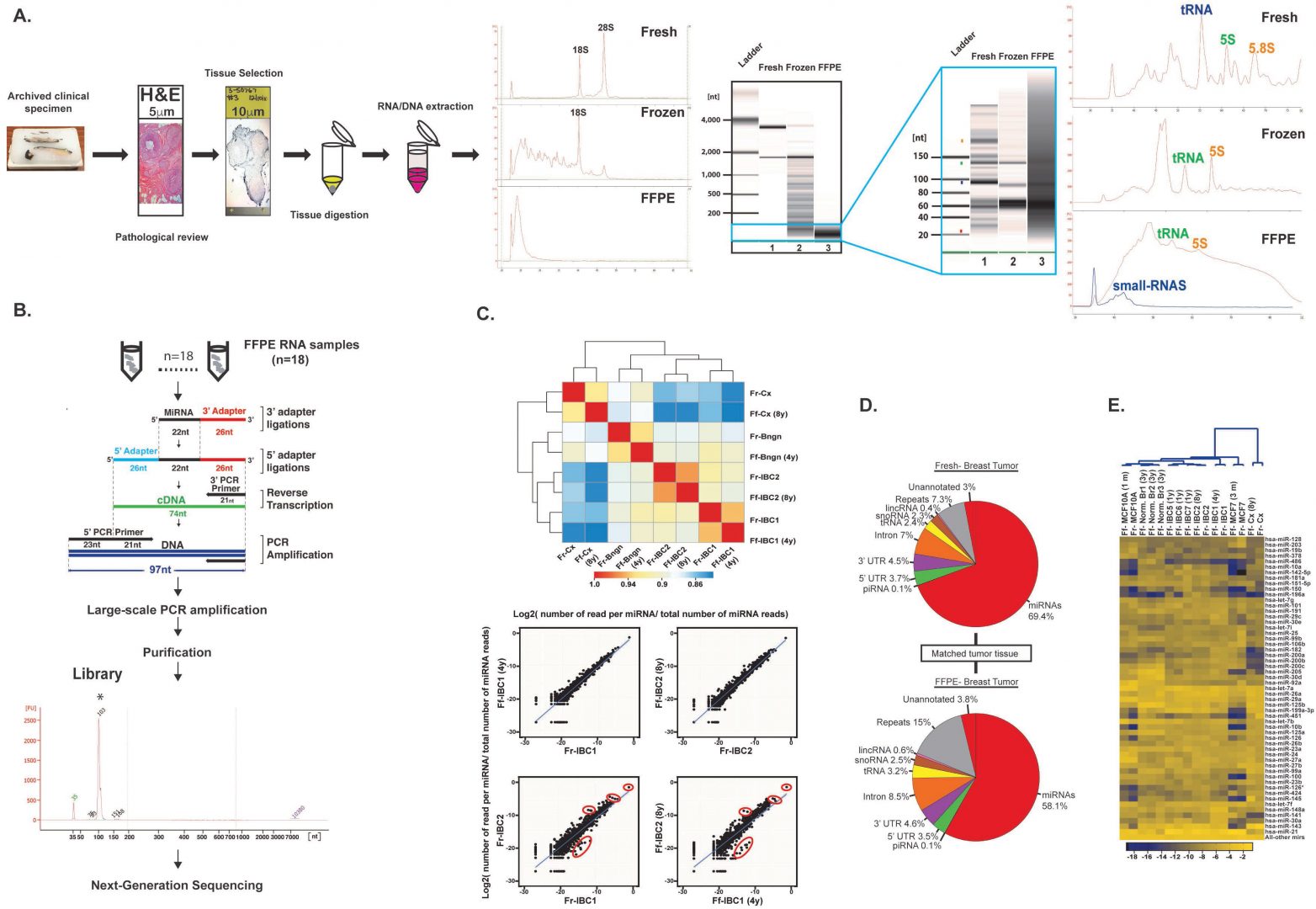 The laboratory has developed technologies to simultaneously extract RNA and DNA from archived specimens, working with tissues that have been stored for more than 45 years. Our analyses demonstrated that nucleic acids stored for extended periods are usable and can be analyzed with high-throughput technologies. Considering the vast amount of human tissues that are archived by hospitals around the United States and the world, as well as the amount of clinical data and follow-up history associated with these specimens, we have successfully demonstrated that retrospective molecular studies can help identify early molecular changes associated with the development of cancer. In recent years, the laboratory has focused its research efforts on the expression analysis of microRNAs, which are small non-coding RNAs that play universal roles in the regulation of gene expression, and whose deregulation has been associated with all the hallmarks of human cancer. Our research efforts have been directed toward the identification of molecular markers that are deregulated in non-invasive stages of cancer, but that play important roles in the transition toward invasive stages. Some of the work that we have done has also been associated with the evaluation of known molecular markers for progression toward distant metastasis. We are also evaluating the detection and identification of circulating biomarkers, using novel technologies and studying circulating exosomes in cancer patients.

Tissues and biopsies archived from human patients from whom the pathological data and clinical history have been recorded represent an invaluable source of information for epidemiological studies and biomarker discovery. However, the high-throughput analysis of degraded mRNA transcripts has been hindered by their small size and low abundancy. To overcome these challenges, we developed a molecular technology to restore damaged mRNA transcripts on a global scale. This methodology is based on the synthesis of short antisense DNA primers, produced from the degraded RNA, which can be used to reverse transcribe complementary sense mRNA transcripts contained in a universal “high-quality” mRNA library. With this method, short and damaged mRNA transcripts can be elongated and analyzed on cDNA microarrays to provide tissue/tumor specific gene expression data (US patent 8,497,067).

A major issue encountered when working with archived clinical specimens resides in their limited availability as well as the impossibility to obtain additional tissue material once the initial block(s) have been exhausted. To address this problem, we designed a highly efficient and robust simultaneous RNA and DNA extraction method, which provides maximum amounts of RNA and DNA without affecting extraction yields for either of them (from US patent 9,309,559). We used this method with human tissues and demonstrated its applicability and efficiency when working with older FFPE tissues. Total RNA extracted with this approach can be analyzed in single or multiplex qPCR assays, by microarrays or bead-arrays, and by next-generation sequencing. Using highly degraded total RNA from FFPE specimens extracted by this method, we also designed a highly reproducible and robust cDNA library protocol for analysis of miRNA expression by next-generation sequencing. Finally, genomic DNA extracted with this method can be subjected to bisulfite treatment and analyzed for methylation patterns, and undergo next-generation sequencing. We are currently developing a next-generation sequencing method to analyze degraded FFPE RNA and determined that the whole-genome DASL assay from Illumina provides reliable quantitative data when using archived specimens. 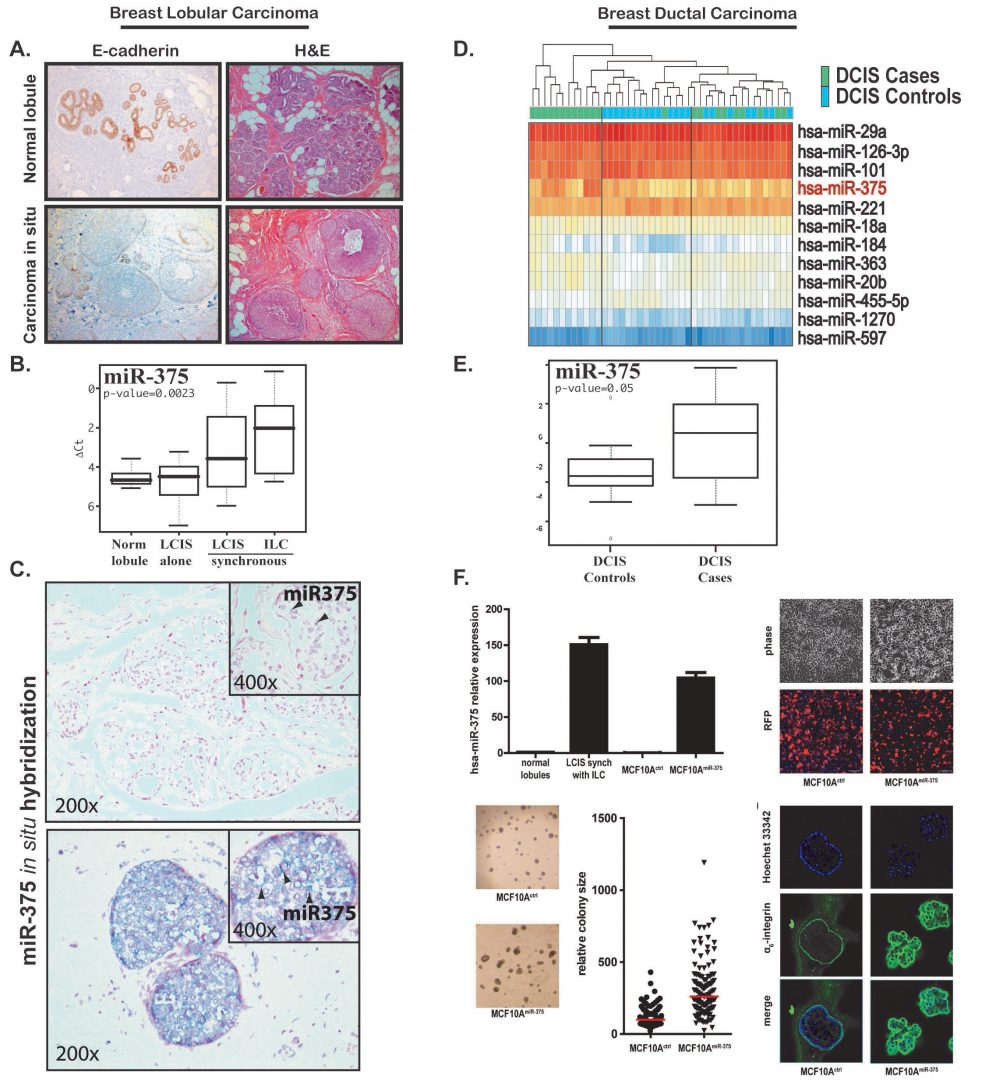 Breast cancer is a life-threatening disease and the most common type of cancer in the United States. Early detection is considered to be the first line of defense against this disease and has been responsible for a steep decrease in cancer-related deaths. Breast cancer screening is routinely performed by mammography, supplemental digital breast tomosynthesis, ultrasound, and/or MR imaging, which also allow detection of non-invasive ductal carcinoma in situ (DCIS) lesions. DCIS lesions, which are also called stage 0 breast cancer, represent about 20% of all newly discovered breast cancers. These in situ lesions represent the penultimate stage before invasive disease when following a model of stepwise histological progression from atypia, to hyperplasia, to atypical hyperplasia, to carcinoma in situ, and ultimately to invasive disease. Women diagnosed with DCIS receive aggressive treatment; nevertheless, only 5-14% of them will develop invasive disease within 10 years of their DCIS diagnosis. Although there are known clinical and pathological features as well as protein markers that can help evaluate these lesions, very little is known about the molecular pathways and markers involved in the development of invasive disease. Given the latent interval between DCIS diagnosis and subsequent invasive disease development, as well as the time required for prospectively collecting DCIS specimens, molecular analyses require the use of archived specimens.

Using an anatomically and pathologically related study model within the terminal duct lobular unit, we performed miRNA expression analyses on archived normal lobules, lobular carcinoma in situ, and invasive lobular carcinoma specimens. Our analyses revealed miRNA expression deregulation correlated with the development of invasive disease. One of the deregulated miRNAs, namely miR-375, whose expression was increased in in situ lesions concurrent with invasive breast cancer, validated the molecular relatedness between these lesions and suggested that this miRNA may play an important role in the development of invasive disease. Using the non-tumorigenic MCF-10A cell line, which forms acini in three-dimensional culture and provides an in vitro model for mammary morphogenesis, demonstrated that cells expressing miR-375 were unable to form acini, which lost their cellular polarity. A pilot study on DCIS specimens further validated the upregulation of miR-375 expression in lesions from patients who later went on to develop invasive breast cancer. These findings suggest that early molecular events contribute to the development of invasive disease, which are detectable in archived specimens. By conducting large-scale retrospective studies using archived breast DCIS specimens associated with banked clinical data and patient history, we are further mining for novel molecular markers associated with the development of invasive breast cancer. 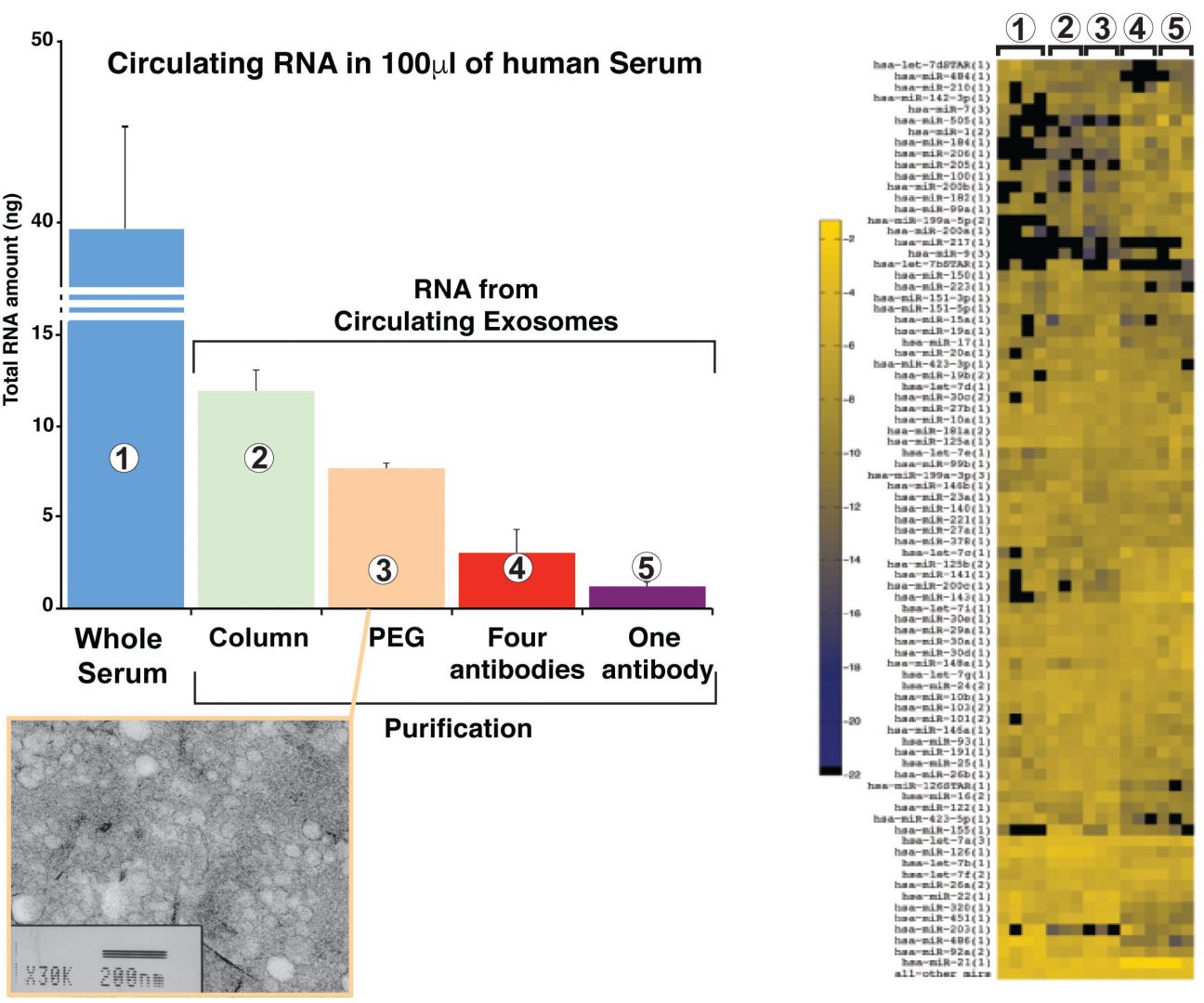 Exosomes have emerged as major intercellular communication vesicles and have also been demonstrated to play critical roles in the development and progression of cancer, notably during metastasis. There is a plethora of lipid bilayer vesicles (different sizes and forms) that are released by cells in the micro-environment and the circulation, and which have been shown to contain proteins and nucleic acids that can have tremendous effects on the recipient cells. We have concentrated our efforts on developing assays to purify exosomes and have been able to robustly sequence the miRNA content of circulating exosomes. Based on preliminary analyses and work that we performed with collaborators, we determined that the method of purification greatly influences the data that will be obtained. Thus, we are currently concentrating our efforts on developing reproducible assays that will allow us to purify selected populations of exosomes, enabling us to identify novel cancer-specific biomarkers. Our exosome research focuses on breast, lung, and prostate cancers.

We thank the National Institutes of Health, the National Cancer Institute, and the Breast Cancer Research Foundation for supporting our current and past research projects.